Zoraxel, The Latest NON-PDE5 Inhibitor Drug for the Treatment of Erectile Dysfunction

Zoraxel is a developmental stage drug for sexual dysfunction that directly modulates the sexual activity control center in the brain. Zoraxel enhances the action of serotonin and dopamine, brain signaling molecules that play a key role in three phases of male sexual activity: arousal, erection and release. Zoraxel is the first ED therapeutic to affect all three of these phases. 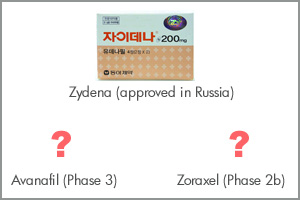 Erectile dysfunction (ED) causes the consistent inability to attain and maintain an erection sufficient for satisfactory sexual intercourse. Erectile problems may be due to ‘psychogenic’ causes (e.g., depression or stress), ‘organic’ causes, or both.  The launch of the first orally available phosphodiesterase (PDE)-5 inhibitor, Viagra®, in 1998 established a new standard care for ED and pioneered a new market. Cialis® and Levitra® were subsequently launched in 2003 as second-generation PDE-5 inhibitor drugs. However, 30% of patients are refractory to the leading PDE-5 inhibitor drugs. In addition, PDE-5 inhibitors also increase the risk of a variety of cardiovascular diseases, including heart attack.  Zoraxel also has superior safety compared to PDE-5 inhibitors. Contrary to peripherally acting PDE-5 inhibitors, Zoraxel is centrally acting in the brain affecting all three functions of sexual activity.

The Phase IIa clinical trial of Zoraxel is now complete with positive results.  The double blind, randomized, placebo-controlled, dose ranging study found that human subjects treated with Zoraxel demonstrated improved erectile function as measured by changes over the International Index of Erectile Function (IIEF) baseline score within the 8-week treatment period.  The study, which was designed to assess Zoraxel’s safety and preliminary efficacy in male subjects ages 18 to 65 with ED, demonstrated a dose dependent treatment effect achieved by Zoraxel as assessed by the IIEF survey. Zoraxel was found to be safe and well tolerated, with no serious adverse events reported. Furthermore, subjects treated with Zoraxel demonstrated improved erectile function and significant improvement in the quality of life measures. The Phase IIb trial, which will include the Sexual Encounter Profile (SEP) survey, IIEF and quality of life study endpoints will continue through 2010-11.

Data from Phase IIa reported that males treated with Zoraxel showed significant improvements in erectile function as well as quality of life measurements. The report also shows the treatments to be safe, and was well tolerated by the test subjects, with no serious adverse side affects. This past study was concluded in May of 2009. For these reasons Rexahn has decided to continue with Phase IIb.

Phase IIb will study the continued success on more than 200 male subjects aged 18 to 65 in a 12 week study on ED. The 12 week study will consist of a double blind, placebo controlled, randomized study. The study will also include quality of life study endpoints, the Sexual Encounter Profile survey (SEP), and the International Index of Erectile Function IIEF).

Rexahn Chief Executive Officer, Dr. Chang Ahn said “The progression of Zoraxel’s clinical program is very encouraging.” Rexahn believes the future of ED treatment is not by targeting the end organ erectile function, but rather the ED treatment lies in the modification of the central nervous system which in affect modifies the condition. “Zoraxel has the potential to be the first drug capable of this action and to establish a new standard of care for erectile dysfunction.”

Let’s hope that this new drug will give us more choice that lead into the better solution to erectile dysfunction which is grow larger and larger in this past years.

What differentiates Zoraxel™ from other ED drugs and how does it benefit the patients?

Unlike PDE-5 inhibitors targeting peripheral blood flow, Zoraxel™ works to boost sexual function by directly affecting the brain circuit. Zoraxel™ enhances the action of serotonin and dopamine in the brain, which play key roles in three phases of male sexual activity: arousal, erection, and release. Preclinical studies suggest Zoraxel™ increases dopamine and serotonin levels in nucleus accumbens, a brain region that influences the parasympathetic nervous system which, in turn, controls penile erection.
Because Zoraxel™ may have the potential to reinforce the parasympathetic tone toward the genitalia by modulating either the autonomic spinal cord nuclei controlling penile smooth muscle or parts of the brain projecting to the region, it may offer important treatment benefits for patients with “psychogenic” ED.

For more information you can visit the reference links below.

I'm an Indonesian doctor. I Believe that science and knowledge do not belong to anyone in the world. Science and knowledge is meant to be shared to make the world a better place to live. But if you find any material posted here is violating any copyrights, feel free to contact me and I will delete that. I believe that someday my blog can change the world. I BELIEVE in the POWER of WORDS! Do you..?
View all posts by yuan ade sukma, MD →
Gallery | This entry was posted in Andrology Latest Update and tagged how zoraxel work, latest drug dor erectile dysfunction, latest ED therapy drug, Non PDE-5 Inhibitor drug, rexahn pharmaceutical, Zoraxel, zoraxel mechanism of action, zoraxel picture. Bookmark the permalink.