Prostate Cancer after Radical Prostatectomy? How Is It Possible?

Radical prostatectomy involves removing the entire prostate and any immediately adjacent tissue that is thought to be cancerous. Additionally, lymph nodes in the area of the prostate can be removed if thought necessary. So how can prostate cancer reappear after the removal of all prostate gland? That question along with many other questions is answered in the article below.

1. Q: Where is the cancer when the PSA rises after a radical prostatectomy?
A: It is not possible to say for certain where the recurrent cancer is located, but there is about a 70% chance that it is in the “bed of the prostate” (where the prostate used to be). Accordingly, radiotherapy has a good chance of controlling it. 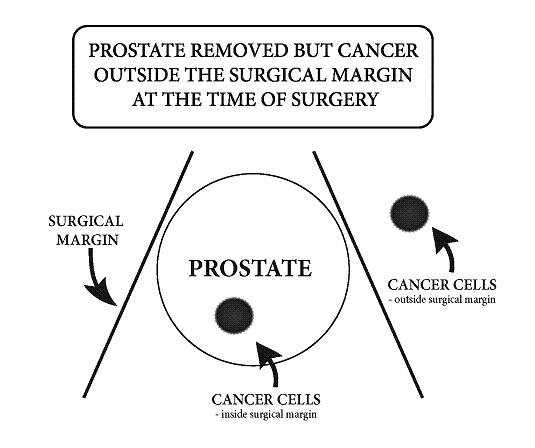 All elevated PSA levels after surgery should be re-checked to rule out a laboratory error. For practical purposes, it is very difficult to detect PSA when levels are less than 0.2 ng/ml. Therefore, we consider any PSA value less than 0.2 as being negligible. A value of 0.2 or 0.1ng/ml would be considered essentially zero. PSA above 0.2 or above is an indication of cancer recurrence, and treatments for recurrence should begin before the PSA reaches 1.0ng/ml.

3. Q: What kind of follow-up do you recommend after a radical prostatectomy?
A: With any cancer, not only prostate cancer, there’s always a possibility that the cancer can come back and that’s why patients need to have follow up visits. I recommend a PSA test every six months for 15 years after the operation.

That said, in the category of men who have a prostate cancer removed that is very small and totally contained within the prostate and all the margins are clear and it has not spread to any lymph nodes, the life expectancy is virtually equal to that of the normal population who have never had prostate cancer.

4. Q: How useful is a PSA test once a patient is diagnosed with cancer and in therapy?
A: PSA is an excellent marker for use during and after cancer therapy. Ninety-nine percent of the time, PSA lets a patient know how the cancer is responding to the treatment.

5. Q: What should I do when my PSA level begins to rise after a radical prostatectomy?
A: The two treatment options are postoperative radiotherapy, which should begin before the PSA rises above 1.0ng/ml, and intermittent or continuous hormonal therapy, which can be initiated immediately or delayed until the PSA rises to 4.0.

6. Q: What is follow-up (postoperative) radiotherapy and why would it be needed after a RRP?
A: Sometimes, it is strongly advised when the pathology report shows positive (cancerous) surgical margins or extension of the tumor beyond the prostate gland.

Also, it is sometimes advised when the PSA begins to rise after surgery.

There are two types of follow-up radiotherapy:

7. Q: Is there any way of predicting if follow-up treatment will work once a PSA has started rising after initial prostate cancer treatment?
A: Not really, but the prospects are better if the PSA begins to rise after a long interval from radical prostatectomy and if the rise is gradual.

8. Q: Why check PSA values after a radical prostatectomy if a man has no prostate?
A: Some rogue cancer cells might escape from the prostate and not be noticed by the pathologist. Any PSA that they produce will be absorbed into the bloodstream and elevate the PSA level. (See http://www.drcatalona.com and search on postoperative PSA.)

9. Q: When testing for doubling time in a recurrence of prostate cancer after a radical prostatectomy, how often should a man take a PSA test after the first test indicates a detectable rise?
A: Every 3 months.

However, men who are definitely going to need postoperative adiotherapy by virtue of the fact that they had adverse pathology findings in their final radical prostatectomy specimen should not wait around testing PSA levels to calculate a doubling time, in my opinion.

They should receive salvage radiation as soon as the PSA rises above 0.2.

10. Q: I am 59 and in an advanced stage of prostate cancer. When the PSA starts to rise, at what level does it metastasize?
A: Generally, not before the PSA reaches 50 ng/ml; however, some high grade tumors that do not produce much PSA might produce metastases at lower PSA levels. The best way to be sure is to have a bone scan, at least yearly, if the PSA is rising. An abdominal and pelvic CT scan is also helpful to determine whether there are metastases in lymph nodes or other internal organs.

The important point is that with intermittent hormonal therapy, if the PSA level is maintained between zero and four, there is a very low likelihood that the cancer will have spread.

The best way to learn what is available is to call the medical oncology division at your region’s medical center and ask what clinical trials are available for patients with prostate cancer that is no longer responding to chemotherapy.

12. Q: My husband has an elevated PSA after surgery. The recommendation is for radiation with nothing being said about hormonal therapy. Do you recommend radiation or is hormonal therapy just as effective as radiation?
A: Both are effective. The advantage of radiation is that it is potentially curative if the remaining cancer cells are confined to the radiation fields. In patients whose PSA remains elevated after surgery, there is a greater chance that the cancer has spread to other sites, and then hormonal therapy is needed.

13. Q: I have a rising PSA after having a radical prostatecomy 16 months ago. I have decided to have salvage radiation. I am getting mixed opinions regarding having a short course of hormone therapy before the radiation. Do you recommend hormone + radiation therapy for a rising PSA after surgery?
A: Some evidence suggests that when radiation is used as the main treatment for “high risk” tumors (locally advanced or high Gleason grade), combining hormonal therapy with radiation is beneficial, although there is no proof of this benefit for salvage radiation. However, I frequently recommend it in patients with high Gleason grades (7 or higher).

15. Q: What are the statistics on the recurrence of prostate cancer after a radical prostatectomy?
A: Patients should have their PSA monitored every 6 months for 15 years. The chances for a recurrence decline the longer PSA levels are undetectable.

Overall, about 10% to 30% of patients (depending on the findings in the prostatectomy specimen) who have had a radical prostatectomy have a recurrence in their lifetime. Of these recurrences, about 50% occur during the first three years, about 30% occur from years three to five, and 19% after year five.

16. Q: Do you recommend any tests or procedures other than a PSA for follow up after a radical prostatectomy?
A: I recommend a PSA test every 6 months and a digital rectal examination once a year. If the PSA is in the undetectable range and the digital rectal examination reveals no lumps or bumps that seem suspicious for recurrent prostate cancer, no further testing is indicated.

Although the vast majority of patients with recurrence of their cancer have a rising PSA, a few have a high-grade cancer that might not produce much PSA but might be detected on a digital rectal examination.

17. Q: My pathology report after a radical prostatectomy stated: “Focally involved right posterior, inferior third prostate.” What does focal involvement mean and what does that report mean?
A: “Focal” in this context usually means microscopic amounts of cancer, usually about the size of a pencil dot. The report means that the pathologist found a small region of prostate cancer in the right lobe of the prostate toward the back and lowest regions of the gland. This low-volume of cancer would be a very favorable finding.

The PSA should be less than 0.1 after complete removal of the prostate, and if it rises, it is usually evidence of a recurrence.

In some instances the rate of rise is important. If it just begins to rise many years after surgery and rises very slowly, immediate further treatment might not be necessary.

However, if it rises persistently, treatment should be initiated before the PSA rises too much (before the PSA gets higher than 0.5 if the follow-up treatment is to be salvage radiation therapy

Interesting article that you also should read https://yuanadesukma.wordpress.com/2011/05/05/is-it-safe-to-give-testosterone-after-treatment-for-prostate-cancer/

This Questions and Answers section is taken from Dr Cataluna website http://www.drcatalona.com. For more detailed information and questions, I recommend you to visit his website. Also thank you for Dr Cataluna for the great information.

For more detailed information you should directly visit the references below:

I'm an Indonesian doctor. I Believe that science and knowledge do not belong to anyone in the world. Science and knowledge is meant to be shared to make the world a better place to live. But if you find any material posted here is violating any copyrights, feel free to contact me and I will delete that. I believe that someday my blog can change the world. I BELIEVE in the POWER of WORDS! Do you..?
View all posts by yuan ade sukma, MD →
This entry was posted in Andrology Latest Update and tagged biochemical recurrence of prostate cancer, how prostate cancer reappear, prostate cancer recurrence, PSA Rising after radical prostatectomy, therapy for ca prostate recurren, what PSA after radical prostatectomy. Bookmark the permalink.

3 Responses to Prostate Cancer after Radical Prostatectomy? How Is It Possible?